The first telephone system adopted in Algeria was provided by Landis & Gyr, which also produced a 50-unit green card with a 1.5 mm optical band. The card was printed in only 5.567 copies and is very rare today. Later, reprints were issued, with some variations both on a graphic level and on the optical band, which followed the evolution of Landis & Gyr technology: from the original 1.5 mm of height it passed to 2 mm, then to 4, and finally to 3. In 1987 a 10-unit card was also issued. 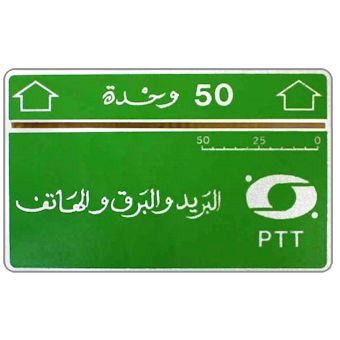