In 1985, the first phonecards appeared in China, introduced by the Shenda Telephone Company Ltd, a joint venture between Cable and Wireless PLC and Shenzen Telecommunications Development Co., for use in Shenzen Province, bordering on Hong Kong in the south of China.  They were manufactured by Autelca and there were printed three values: ¥ 12 (15,000 issued), ¥ 25 (20,000) and ¥ 50 (20,000). Soon after, other cities and provinces started to issue their own phonecards, mostly supplied by Japanese firm Tamura. 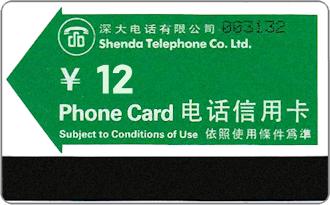