Despite being the largest of the islands that made up the Netherlands Antilles, dissolved in 2010, Curaçao began to use telephone cards later than the others. As for the other islands, the technology used was the one developed by Landis & Gyr, and the first card, issued in 1990, was a value of 40 + 5 units with code 006A, which was then reprinted several times in the following years, until 1994. In 1991 the value of 100 + 15 units was added, and in 1992 the one with 200 + 40 units that completed the series, and both of them too were reprinted with different codes until 1994. 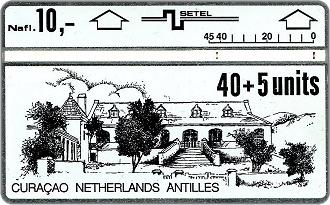