On January 1, 1993, Czechoslovakia split peacefully into two new countries, the Czech Republic and Slovakia. Telecom Praha, the Czechoslovak national company, which had already issued several cards before the split, continued to operate in the new nation, so the first card issued in 1993 is the first Czech issue: it represents two horses inside a paddock and has a circulation of 200,000 copies, of which one part mounted the Schlumberger SC4 chip and one part the SC5 chip. 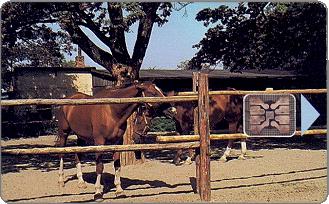