The Dominican Republic is a Caribbean nation that occupies the eastern part of the island of Hispaniola, which it shares with Haiti. The phone cards used are mostly of the remote memory type and have been marketed by several telephone companies. The first of these to appear on the market seems to have been issued by the company Hola, which in 1994 printed a white card with the blue silhoette of the nation, available in two denominations, 5 and 10 $ (Dominican peso). The only cards with chips were issued in 1995 by the company AACR: there were only two phones installed (one in Santo Domingo and one in Puerto-Plata), but the experiment was discontinued. 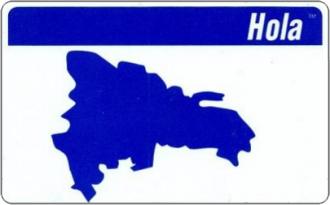