The Cayman Islands, an autonomous British Overseas Territory, are located in the western part of the Caribbean Sea and consist of three islands. Grand Cayman, Cayman Brac and Little Cayman. The first phonecards used were magnetic cards supplied by Autelca to Cable and Wireless who owned the rights to telephone services. The face value was specified both in units and in Cayman dollars at 10 cents per unit, and three cards were produced: 75 (50,000 run, “CI” + 6 digits code), 300 (30,000, “CI” + 5 digits code) and 500 units (15,000, “CI” + 5 digits code). In 1990, 70,000 cards with 75 units value were re-issued, but they can be distinguished by the 7-digit code without the prefix “CI”. Finally, in 1991, the Autelca system was abandoned and GPT telephone sets were installed. 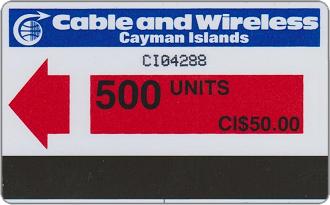