Deutche Bundespost ran parallel field trials of four different systems before definitively adopting chip cards. The first trials began in June 1983 with the optical cards of Landis & Gyr. 30 telephones were installed in Frankfurt, at the airport and in the railway station, and red optical cards were used, in three values: 5 units (8,500 run), 45 units (54,000 run) and 92 units (20,000 run). The trial ended in December 1986.
In the meantime, from 1984 to 1989 the Autelca magnetic card system was tested in the city of Goslar, and in the same years the chip card system developed by Siemens, which will ultimately prove successful, was installed and tested in the cities of Bonn and Aachen. Finally, from 1985 to 1989, another magnetic-type system using lightweight cardboard cards, developed by Standard Elektrik Lorenz, was tested in the city of Bamberg. 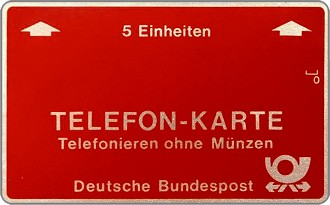