The first cards issued by British Telecom date back to 1981 and the system adopted was the optical card system of Landis & Gyr. The cards were initially produced in Switzerland, but from March 1983 they began to produce them directly in Great Britain. Initially only definitive cards were issued, in series of 4 or 5 values, which was usually accompanied by a complimentary card. The various definitive series issued changed graphically over the years, but kept the characteristic green color.
The first series of definitives of 1981 included three cards: 10 units, 40 units, and 200 units. Subsequently they were reprinted several times with different codes, and in 1983 a 100-unit card was added to the series. The first runs are distinguished by not having the classic L&G code consisting of three numbers and a letter, followed by the single numbering; but the code was simply made up of 6 numbers (10 u), 4 or 6 numbers (40 u), and 2, 3 or 6 numbers (200 u). The cards with the numeric codes only, issued at a time when collecting did not exist, are today extremely rare. 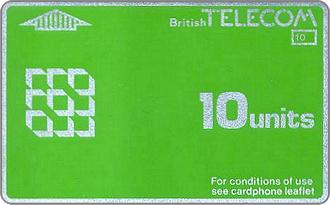