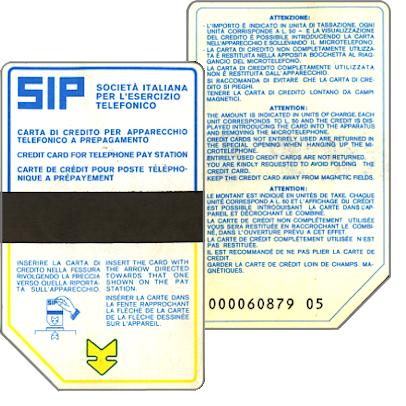 In 1976, in Italy, the first prepaid calling card was born: in Rome, more precisely in the public telephone area of the Villa Borghese Galoppatoio, the first magnetic card phones were installed. The choice of the card system is dictated above all by the need to eliminate from the public telephones the drawers collect coins or tokens, often the subject of special attention by people who, especially at night and in areas not frequented, empty their contents. After the first experimentation period, magnetic card telephone devices are beginning to be installed in the main railway stations, in airports and, in general, in places of great public attendance.

The introduction of the prepaid phone card not only solves the problem of theft, but allows SIP to introject in advance the amount of phone calls that have not yet been made. The first cards used in a non-occasional way and with a national distribution are the so-called “Yellow-Blue” of 1977, with the Sip logo in yellow on a blue background. They are inserted vertically in the phone and have a face value of 2000, 5000 and 9000 lire respectively, corresponding to multiples of the rate in force for one click. These cards are produced by Pikappa of Masate and manufactured in gray-white PVC. A common feature of these first telephone cards is the lack of the date of issue; since they are used by SIDA brand telephones, they are also known by the name of SIDA first type.

The first type SIDA have a punching on the left corner (which in technical terms is called “trezzatura”) of circular shape for the 1977 cards, and slightly curved for those of 1978; from the following year the quarter will always be straight. The cards issued since 1979 also present an important innovation: the date of issue on the B side of the card, in the form of a four-digit numerical code (the first two indicate the year, the others the month); these cards are therefore found with date 7903 (March 1979), 8003 (March 1980), and 8104 (April 1981).

It is interesting to note that the consumption of this first series of cards is quite limited, given the scarce spread of card phones, as can be seen from the known circulation of the various issues. In fact the 7903 series, which should have a total circulation of 600 thousand pieces, is in use until March 1980, when the next series is released; consumption, in the three denominations of 2000, 5000 and 9000 lire, is therefore around 600 thousand pieces per year in 1979, and in as many copies in 1980 and 1981. 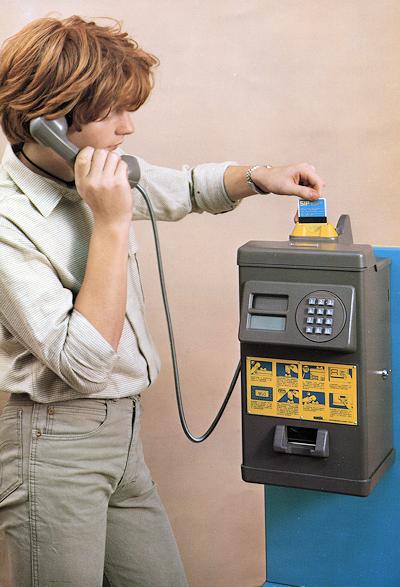 The SIDA series first type, considering all the different variations of the detaching corner, should be composed of 23 different cards, issued between 1977 and 1981 (let’s say because it can not be excluded that new variants can be found and cataloged until unknown today). The circulation, which for the issues of 1979, 1980, and 1981 should be 100,000 pieces per type, almost certainly goes completely dispersed for at least three reasons. Firstly, the cards used completely are held by the telephone and subsequently destroyed in the presence of the Guardia di Finanza. Secondly, collecting at the time is not developed enough, so almost no one collects phone cards. Finally, the first type SIDA cards are not beautiful enough, with attractive figures or writings, to make sure that the occasional user is encouraged to put them aside. Therefore, the first type SIDA cards on the market are certainly much less than what is meant by their circulation. Their current price, even if on already quite high levels, is certainly destined to increase: it would be enough that even a small part of the new collectors had the desire and the possibility to go back in time with their own collection.

A NEW LOOK FOR SIDA SERIES 2

After the release of the last cards of the so-called SIDA 1 type, which took place in April 1981, SIP (Italian Telephone Operator is the name of the time) decided to redo the look of its phone cards; the background color on which the Sip logo stands out passes from blue to yellow, and consequently the Sip logo and the nominal value become blue, while the indications on how to use in side A are yellow on a blue background. Also the B side, where there are some explanatory writings in three languages, Italian, English and French, is widely reworked compared to the previous edition.
But the most important feature of the SIDA 2 cards is the new nominal value of the three cuts that make up each run. The low value of the series goes from 2000 to 3000 lire, the middle value from 5000 to 6000, while the high value is left unchanged at 9000 lire; the inflation that characterizes the early 1980s therefore began to be felt, with a nominal increase, compared to the previous issue of April 1981, of around 12%. The various printings of the issue of February 1982 continue, with small variations of the typographic characteristics of the control numbering of the A side, for about three years, always keeping the date 8202. During this period the actual consumption of telephone cards can be deduced from the circulation total of 7 million and 900 thousand pieces, equal to about 220 thousand cards a month.

In February 1985 it was finally decided to update the issue date, which therefore becomes 8502 (February 1985). With this date appear the first telephone cards issued specifically for the German-speaking minorities of South Tyrol, characterized by entries in Italian, German and English. The circulation of this first issue is 100,000 copies for each value, from 3000, 6000 and 9000 lire. A rather high circulation for an ordinary card, which, however, ensures a widespread diffusion in the valleys of Alto Adige. Therefore the “8502 Alto Adige” cards are decidedly rare both used, and even more so, new ones. This first issue is followed by others with dates 8503, 8504, 8505, 8506, 8507. Overall, in the first six months of 1985 about 5.5 million copies are issued, destined to satisfy the growing telephone needs of Italians until the next issue. scheduled for May 1986. 1985 ends with an issue for South Tyrol, in three denominations of 3000, 6000 and 9000 lire, which are also the last to have the characteristics of the cards type SIDA 2.

In May 1986, ten years after the first issue, the series of cards of the SIDA 3 type emerged. The new cards are mainly distinguished by the disappearance from the A side of the matrix (white box) replaced by the date that in SIDA 2 was on side B. Other emissions occurred during 1986, including one for Alto Adige, in May, in the three cuts of 3000, 6000 and 9000 lire, in June, in July and, finally, in October and November, in the lower values of the largest consumption. Overall, the SIDA 3 issued in 1986, and intended for consumption until April 1987, are about 6.7 million, with average sales of about 600 thousand pieces per month; almost double the last SIDA 2, a sign that the telephone devices with magnetic card readers are spreading widely.

To finish with the SIDA, it should be remembered that their issue continues throughout 1987, to end in March 1988 with a 3000 lire card for South Tyrol. Without counting the various subtypes, the total SIDA 2 cards should be 24, while the SIDA 3 cards would amount to 33.