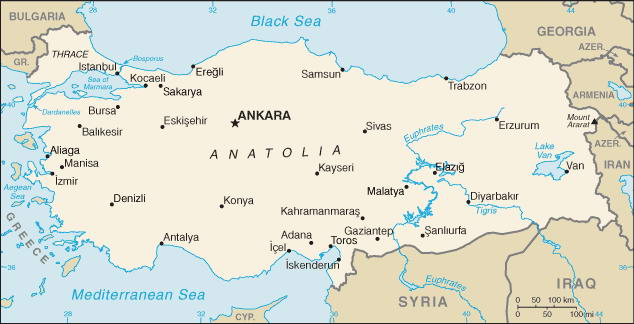 Turkey is a state located in western Asia, which includes a limited part of the territory in Europe, corresponding to the eastern part of Thrace. European Turkey and Asiatic Turkey are separated from the Bosphorus, where constantly pass all ships sailing from Eastern European ports.

The country has an ancient history, which dates back to the twentieth century BC. when the territory was inhabited by the Hittites; at times of great splendor, darker periods alternated, up to the present day, with a political situation not too stable and happy.

Not as old, of course, but certainly fascinating for the collector, is the history of public telephony in Turkey. The first experiments date back to the years 1986/1989, when the Turkish telephone company, a PTT sector (Post, Telegraph and Telephone), decided to install a public telephone service with cards; the lack of adequate information on the functioning of the various systems, already active in several European countries, meant that the telephone company staff was completely unprepared in making an immediate decision on the type of technology to be adopted.

It was then decided to divide the city of Ankara into different areas, in order to be able to test in each of them a different system provided by various manufacturers. In each area, a different temporary telephone system would have to be installed, and depending on the results, the technology to be adopted on a national scale would then be chosen.

Four companies were then contacted, the English GPT, the Italian Urmet, the Japanese Tamura and the Swiss Landis & amp; Gyr: however, it is not certain that all the tests of these companies have actually been completed.

The technology that was most successful was the one presented by Landis & amp; Gyr with its optical band cards, which was then adopted and used for several years. The first cards, dated 1986, had a yellow metallized finish, the 2 mm thermograph strip, and had no lateral notch (a bevel that allows blind people to identify the insertion side of the card). In the same year it was also printed a type with a 4 mm band, always without a notch, while the subsequent emissions showed the 3 mm optical band and the side notch on the right side.

There are many variations of the Landis & amp; Gyr, which continued to be used until 1994, some rarer, others more common. They do not change much in appearance, even if the older ones can be recognized by the words “Kontör Atisi” under the words “Telefon Karti”.

While all cards issued until 1989 are yellow, regardless of their face value, the ones produced later are colored differently depending on the value: green for the 30 units card, blue for the 60 units, and yellow for the 120 units; finally, some of these issues have a bank’s advertising on the back.

The cards developed by the GPT constituted a series of nine cards of the magnetic type, well known, of which there are two different variants: the first has the characteristic deep notch and prefixed code by 1TKY, while the second type has the small notch and it is not codified; the face value and the circulation were, for both types, 50 units and 10,000 copies. It seems, however, that the experimentation of the English company was abruptly interrupted already in the initial phase for political reasons, and that few cards were actually used in the phones installed in Ankara. In fact, the series circulating in collecting environments are almost always new, and it even seems that those with small notch without code have never left England.

The Italian Urmet printed for the trial a beautiful card with the reproduction of an ancient vase, and 10,000 copies were produced. The experimentation took place within a military installation and seems to have been completed, which makes the new and magnetized cards more difficult to find, increasing their value: as for Italian cards, in fact, even the type used in Turkey had the corner to be removed before use, typical of Urmet technology.

As for the Tamura, a card was provided with an illustration of a telephone, an image widely used by the Japanese company for test cards; however, while it seems certain that the cards were actually supplied to the Turkish PTT, it is not certain that the test really took place and where. In fact, the Tamura cards are normally found mint.

ALCATEL BELL AND OTHER SYSTEMS

Landis cards & amp; Gyr continued to be produced until 1994, but already in 1991 another telephone system, based on magnetic card technology developed by the Belgian company Alcatel Bell, was installed and widely used.

This type of cards is undoubtedly the best known among collectors, also because PTT produced many illustrated cards to promote tourism in Turkey; these cards, even if at first glance appear similar to each other, actually form part of several series issued over the years. 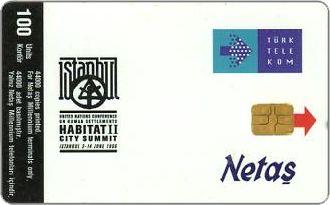 Finally, even the telephone system based on electronic chip cards was used in Turkey: already in 1993 Schlumberger produced a circulation of 1000 cards in the occasion of a telecommunications conference held at the Hilton Hotel in Istanbul, and later, in 1996, Gemplus also issued a limited edition for the “Fransa” 96 event. GPT chip cards were issued by the telephone company Netas and used in Istanbul in 1996, on the occasion of “Habitat II” conference: these were two values, a 100 units card with a mintage of 44,000, and a 350 units with a run of 36,000. The Alcatel Bell system was finally abandoned in 2000, replaced by chip technology cards.

Furthermore, in 1998, remote memory cards were introduced, with different subjects.