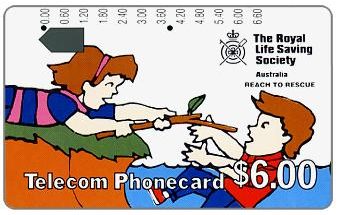 Cards manufactured by Tamura, Anritsu and Hakuto (who mainly make other cards like Orange cards for the railways, but sometimes produce telephone cards when the other two are overstretched) are commonly grouped together by collectors and called japanese because their appearance is quite similar. They are magnetic, but a stripe is not visible, in fact the entire backs contain the magnetic encoding: that is, until today, only one side can be printed in colour, while the back is usually silver or bronze; but the possibility of double-sided printing is to be expected in the near future. The cards are very thin, just 0.28 mm thick and perforations under the printed unit scale show whether, and how often the card is used, and roughly how many units are left.

Tamura cards are in use in Japan and other countries in the world. Older cards can be identified because before 1987 in Japan, and 1988/89 in other countries, they had a white area on the lower left edge with, depending on the number of units, two, three or more black stripes; then, this “barcode” was printed on the back of the cards.
Anritsu cards, whose main consumer is Australian Telstra, usually have a green arrow to show the direction of entering the phone, so they can be distinguished by those manufactured by Tamura.