Jersey is the largest island in the English Channel, between the United Kingdom and France. It is a self-regulating dependency of the United Kingdom, with its own government and laws, which fuses English and French culture. The island’s telephone system is independent of British Telecom, and the magnetic system of the GPT was adopted for the cards. The first issued, with code 1JERA, depicted the Jersey Telecoms logo and was 25 units. 10,000 were printed. 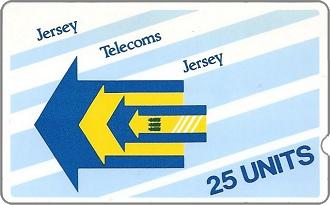