The first telephone cards in Kuwait were provided by the Swiss company Autelca. The first experiments were held in 1987, using the generic testcards in which the value in Kuwaiti dinars was overprinted, but it was only in 1988 that the first public series was issued, with 3 values: 3 K.D (30,000 run), 5 K.D (25,000) and 10 KD (20,000).Two years later the Autelca system was discontinued, and the magnetic one of the Tamura was installed, which remained in use until 1993; in 1991, at the end of the Gulf War, the magnetic system of the GPT was also installed, and the first cards provided by the English company were Mercury Cards printed on the occasion of the liberation of Kuwait. Finally, in 1996, they switched to chip card public telephony. 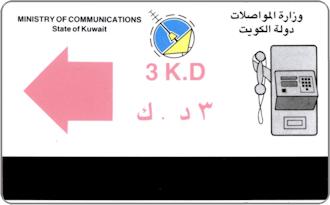