The first Libyan phone card was a 120-unit chip card provided by the French Gemplus. In fact, there is also a variant of this card, which has the same side A, but has different writings on the B side: it seems that the first card had been refused because wordings were too small, so a new one was supplied. They were printed in the same year and with the same circulation of 2000 pieces each, and both are very rare. 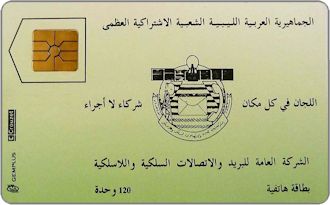