The Mercurycard was introduced to London on July 271988 at Waterloo station, where 26 Mercurycard Telephone Booths had been installed for Mercury Communications’ launch of its Public Payphone Service. The design of these telephone booths was somewhat unusual compared with the familiar BT boxes. 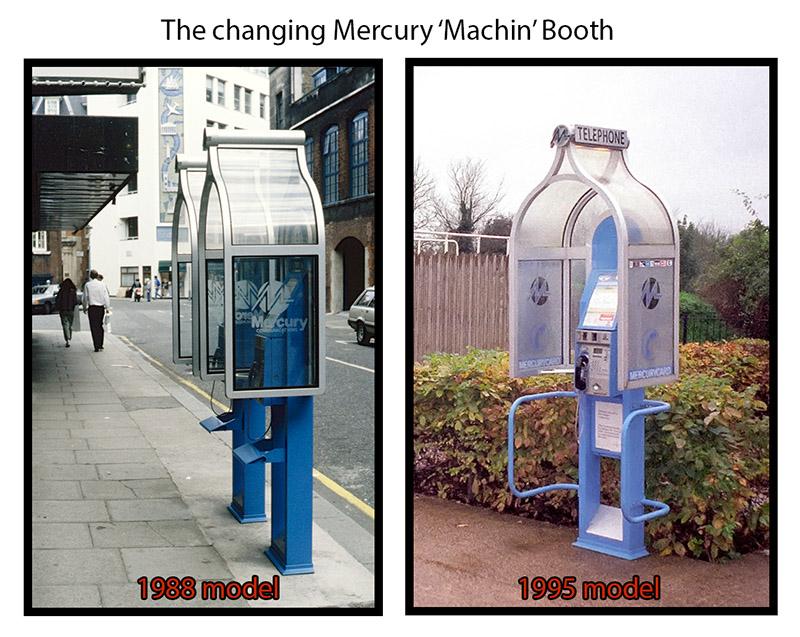 The three designs are depicted on the First Issue Cards. The £2 card illustrates the payphone enclosure designed by Machin Designs Ltd. that was later installed all around the country.

The £4 card illustrates the design by Fitch and Co. Ltd. which was used at many Railway Stations, and the £10 card shows the enclosure designed by John Simpsons & Partners. These enclosures were unique to Waterloo Station but were rapidly superseded by more conventional designs. The launch itself was a masterpiece of publicity. Television and Radio gave extensive cov­erage of the ceremony at which Lord Young, Mercury’s Chairman made a speech referring to “The Battle of Waterloo”, a theme echoed by the special £5 Mercurycard issued the following September to mark the occasion. 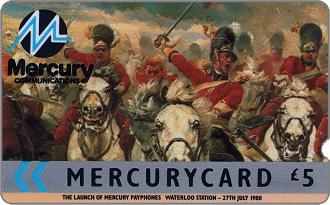 On the day, 40p complimentary cards were liberally distributed to anyone showing the slightest interest in the new telephone enclosures as they passed through Waterloo Station. At the same time a set of three definitive cards was produced in the same values as the First Issue set.

Special folders were produced containing all three First Issue cards. Most of the folders were of thin card and issued main­ly to staff and media representatives, but a very limited number, bound in grey leather were produced for the Directors of Mercury.

The control numbers which appear on the reverse of all Mercurycards were, on these early issues, much smaller and more difficult to read than those to be found on following cards, the controls were burnt onto the card with a laser about half an inch from the bottom edge. Each value of the First Issue set had the same range of control numbers being 1 MERA, 4MERA and 5MERA for the £2 issue with the A being replaced by B for the £4 and C for the £10.

The 4MER issue for all values is the most difficult to find as it appears to have been a rush order when stocks ran out quicker than had been anticipated.

The 40p complimentary card is known to exist with four control numbers, 2MERA, 3MERA, 6MERA, 13MERA. The ’13’ control is by far the rarest with only three copies known to have survived in collectors’ hands. Detailed records were kept of all control numbers issued as a security measure and in order to locate any faults in pro­duction, however this soon proved impractical as the quantities of cards rapidly increased. Most early issues were test printed in quantities of 50 or less and had no control number. These cards were mainly used for publicity purposes and are much sought after by collectors.

The “Battle of Waterloo” card men­tioned above was issued some time after the official launch although it bore the inscription ‘The Launch of Mercury Payphones Waterloo Station – 27th July1988′. These cards of which 15,000 were printed, were on sale at most retail outlets in London and have control 7MERA.

In October three ‘Christmas 1988’ cards went on sale at all retail outlets depicting children in snow scenes, #25 pence from the sale of each card being donated to The Children’s Society. The control numbers and quantities issued for this set are £2 (85,000) – 8MERA, £4 (34,000) – 8MERB, £10 (15,000) – 8MERC. In hindsight the printing figures were slightly on the optimistic side as for a long time these cards could be purchased from Mercurycard dealers for a small premium over face value.

The £2 and £4 values were reprinted the following year with SPRING 1989 omitted. The £2 card is known with the original control prefix of 9MERA as well as 10MERA, some being printed at the top of the card and in a larger type face. The reprinted £4 value has controls 9MERB and 11 MERB.

In June of 1989 a second complimenta­ry card was introduced featuring a Mercury Payphone enclosure and the Eiffel Tower. 100,000 of these cards were issued with control 12MERA, this was the first card to appear with the standard small notch. 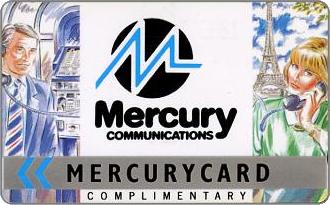 Soon after that, Mercury Payphones were introduced in major cities throughout the country. To mark this expansion five £5 cards were issued, one for each city in which payphones were introduced. These cards were also inscribed SPRING 1989 and showed the following landmarks, BIRMINGHAM TOWN HALL, CLIFTON SUSPENSION BRIDGE, BRISTOL, MANCHESTER TOWN HALL, GLASGOW TOWN HALL, & EDINBURGH CASTLE. The Glasgow card was wrongly titled GLASGOW TOWN HALL rather than GLASGOW CITY CHAMBERS. At the time there were rumours of a reprint to correct this but it did not materialise.

All the above cards were sheet printed by GPT, a process that had a long lead time and was not economic for runs of less than 5,000 cards. It was perceived by the then management of Payphones that a market existed for small runs of cards for business promotions as well as for internal use by Mercury to mark special occasions and as giveaways at exhibitions etc.

The first card to be produced as a short run was for the Networks ’89 exhibition held at the N.E.C. Birmingham. This card was printed by Optim Cardprint onto pre­coded blanks supplied by G.P.T. The quantity printed was 775 with control 15MER. A similar card was prepared for the same exhibition the following year, which was its tenth anniversary but for some reason the card was never issued. 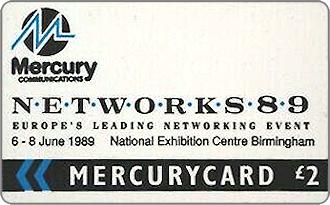