Northern Cyprus, officially the Turkish Republic of Northern Cyprus (in Turkish Kuzey Kıbrıs Türk Cumhuriyeti, in the KKTC abbreviation), is a self-proclaimed republic not recognized by the international community that extends in the northern part of the island of Cyprus since 1983, in areas occupied and controlled by the Turkish army after the Turkish invasion of Cyprus in 1974.
The first phone cards were issued in 1992. They were Alcatel magnetic cards very similar to those used at that time in Turkey, but the coding was different. The first issue included three cards with values of 30, 60 and 100 units, with views of Nicosia, Famagusta and Kyrenia. The Alcatel cards remained in use until 1999, when chip cards were introduced. 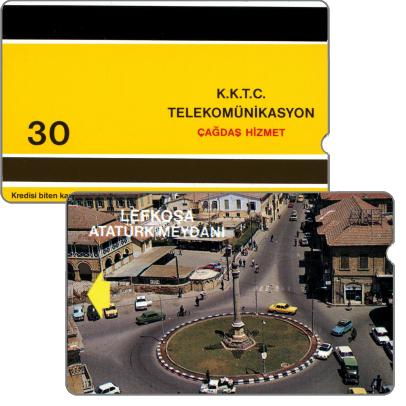