The Mariana Islands are an archipelago of Micronesia that extend for more than 500 kilometers in the Pacific Ocean, located between the coast of the Philippines and Hawaii. The Northern Mariana Islands, not to be confused with the Federated States of Micronesia, comprise the entire Mariana archipelago except the island of Guam considered American territory in all respects. Through an agreement signed in 1986, the nation became a US protectorate and their citizens have a US passport and other rights.
Magnetic cards produced by Tamura were issued by MTC, an affiliate of GTE Hawaii, since 1990. The first issue consisted of a simple white card of GTE, with an adhesive label applied, advertising the 1990 Micronesia Games which were held in Saipan, the most important island of the archipelago. Only a small quantity was prepared and it is now difficult to find. 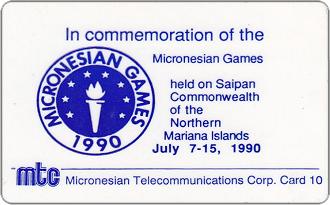