What is commonly considered the first issue of Paraguay, in reality has never been used in that country or elsewhere. It is a Landis & Gyr 120 units and code 901A, produced in 1989. The Antelco telephone company ordered 60 Alcatel Bell phones and 100,000 cards in that year, but the invoice was never paid so the phones were never installed and the cards should have been destroyed, but many of them ended up in the collecting market.
For the real first issue of Paraguay we have to wait another 8 years: it was in fact in 1997 that Antelco issued 4 chip cards, with values ​​of 10 (circulation 580,000), 30 (120,000), 50 (100,000) and 100 units (100,000). The peculiarity of this first issue is that the cards also report the corresponding value in Guaranì (the local currency), certainly not a good idea in a country where inflation was very high. And in fact, the subsequent emissions reported only the value in units. 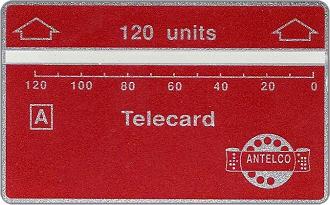