Following the disintegration of the USSR, officialized on December 26, 1991, the Comstar company, which already provided telephone cards and services to the Soviet Union, continued to issue GPT magnetic cards for the new Russian Federation, while other companies began to issue their own cards that used various systems. Among these, the MMT telephone company in St. Petersburg, which used magnetic cards supplied by Alcatel Bell from 1991 to 1993. The first series consisted of four values, with the same image on the front: A, B, 30 and 50, each with a circulation of 1,125 copies. The same cards were supplied the following year, with values A, 30, 50 and 100; in 1993 the last cards were provided, with a different image from the previous one, then the system was abandoned. 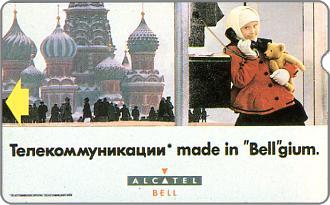