It was Autelca that inaugurated public telephony in this small island state, formed by the two homonymous islands. The classic cards with magnetic band that were issued were only three, a series of ordinary with facial values of 15 units (10,000 run), 25 units (10,000) and 50 units (8,000), which were used from 1986 to 1989, when the GPT system replaced the Autelca one. 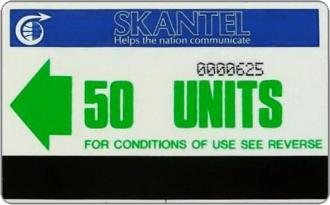