Located in the Lesser Antilles, the archipelago of Saint Vincent and the Grenadines was one of the first states in the Caribbean to use a public card phone system. Already in 1984, in fact, the first cards were provided: produced by the Swiss Autelca, it was a series of three standard cards with magnetic stripe, that can be recognized to have the code prefixed by the letter “V”. The values issued were three: 5 units (20,000 runs), 10 units (18,000), and 20 units (15,000). Despite the high circulation, cards with a value of 5 units are extremely rare compared to the others, and only very few are known. In 1989, as in many other Caribbean states, the Autelca system was discontinued and the GPT one took its place. 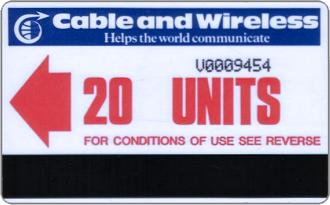