After the dissolution of Yugoslavia, the Republic of Serbia had joined Montenegro forming the Federal Republic of Yugoslavia, a name that in 2003 became the Union of Serbia and Montenegro. Following the referendum of 21 May 2006, Montenegro voted for independence, the federation was dissolved and Serbia (as well as Montenegro) became a sovereign state.
Telecom Srbija, in collaboration with the Greek company “Intracom”, installed chip card phones in 1997, and conducted that year a trial using a 100-unit card, with a circulation of 5,000 copies. This card, in addition to being the first of Serbia, is also the first Yugoslav chip card, if we take into account that Serbia was then part of the Federal Republic. 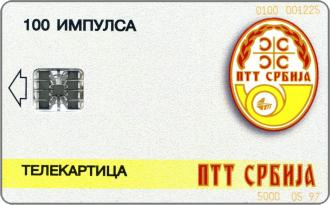