Many systems and many types of cards have been tested in South Africa, both by Telkom, the national telephone company, and by other companies, such as Telkor, MTN, Transtel, Temsa, and others, making this an interesting and fun country to collect. As early as September 1985 a Landis & Gyr had been produced for an exhibition in Johannesburg; later, since 1988, several trials succeeded, but it was only in 1993 that the first public telephone cards appeared on a national scale. Nicknamed “The Big Five”, the series of 5 cards issued by Telkom refers to the five large savannah animals depicted on the cards: buffalo, elephant, lion, leopard and rhino. Each had a facial value of R10 and a circulation of 197,000. 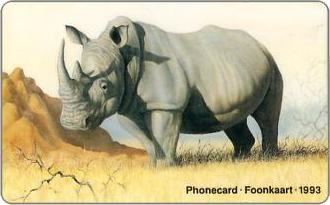