Telecom Eireann first introduced phonecards into the Republic of Ireland in the year 1988. The brand name chosen for these cards was “CallCard”. Telecom Eireann, Ireland’s state-owned telecommunications company became privatized in 1999. Subsequently the name of the company was changed to Eircom.
Throughout the years, many different cards were produced for testing, maintenance or demonstration purposes.
Demonstration cards differ from test cards as they were only issued in limited quantity during the introduction of the cardphones, to ensure their chipset would be compatible with the phones hardware.
Maintenance Callcards were typically plain, with little or no branding in most cases. These cards were used by payphone engineers to verify that the card reader was working, both to read and also to erase units.
Before the introduction of the public phone system based on chip cards, three trials with other systems were conducted in different cities around Ireland: GPT (Plessey) in Dublin; Autelca in Limerick; and Landis & Gyr in Galway. So, Test cards exist for these systems too. 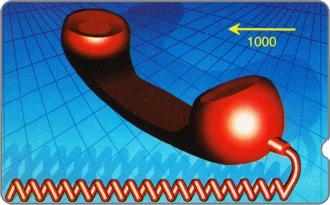 This Service Card was used to test the phonecard systems manufactured by British Plessey/GPT during the Dublin field trial. This generic service card design was also used on service cards in different countries, such as the UK. 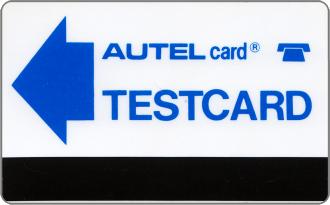 This test card was used to test Autelca cardphones during the Limerick Callcard field trial of 1989. This card has a generic design, which has been used in several Countries, so it is impossible to know if these cards were encoded for Ireland. 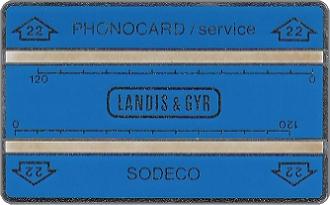 The service card was used by technicians during the Galway field trial of 1989. The card is a standard service card with the number “22” inside arrows, corresponding to the encoding of the cardphone, and has the code 805S on back. 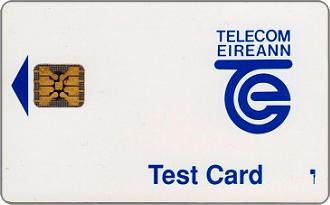 This Telecom Eireann test card, encoded with 150 units, was used by cardphone engineers to test the callboxes. These units could not be used to make any calls, and were erased by the engineer pressing an internal button inside the cardphone. 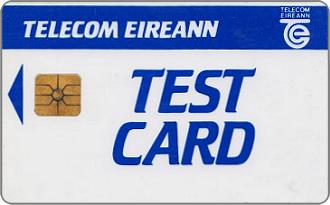 This Test Card was produced by chipcard manufacturer ORGA to test their chipset within Telecom Eireann’s cardphone hardware, and only issued to cardphone service engineers. Each card had a unique 6 digit serial number printed on the back.

This test card was produced to test the McCorquodale chipset under Telecom Eireann cardphones. This chipset was only ever found on test cards. Each card contained a unique 8 digit serial number placed in the bottom left hand corner. 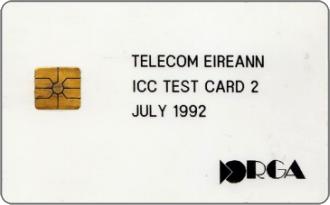 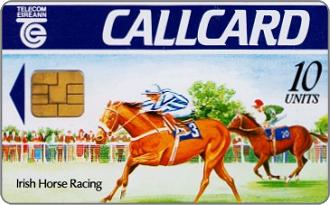 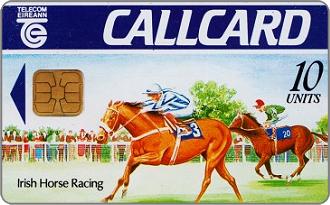 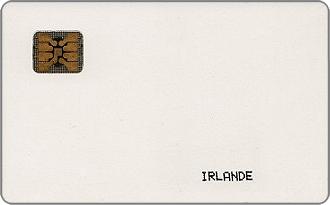 Produced by French manufacturer Schlumberger, this was the very first Telecom Eireann chip based demonstration card. The chip is in AFNOR position, which was the standard positioning placement around the late 1980s.

This Callcard, with Gemplus chip in AFNOR position and encoded with 120 units, was released to cardphone engineers in the late 1980’s, early 1990’s. It includes the old style Telecom Eireann logo without any graphic. 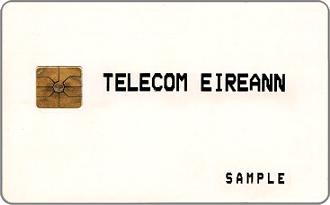 This card, produced by Gemplus, was the third demonstration Callcard issued prior to Telecom Eireann launching their first chipcard, in order to test the Smartcard systems implemented nationwide in the early 1990s. 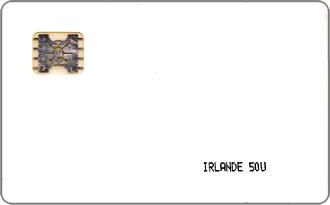 The sixth Demonstration card, this time produced by Schlumberger. As with both Demo 1 and 2 cards, the chipset is installed in the AFNOR position, and to the rear of the card there is a Moreno logo, along with an exposed chipset hole. 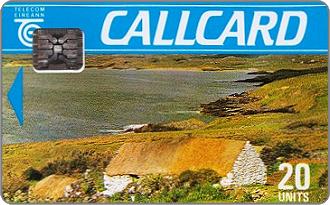 This Demonstration card, produced by French chip manufacturer Schlumberger, features the Callcard chipset installed in the AFNOR position. It is a very interesting demonstration card as the cards design does not suit the chipsets location.