The Vatican City State, born in 1929, is the smallest sovereign state in the world, both by population and by territorial extension. The first telephone card was produced by Urmet and issued in 1992 with a face value of 5,000 lire and a circulation of 10,000 copies. Numerous other Urmet issues followed over the years, mostly with religious subjects; then, in 2014, the system with chip cards was adopted, and they are still issued. 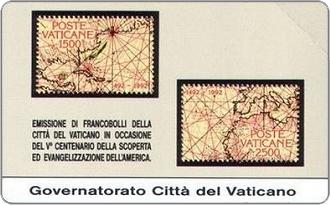