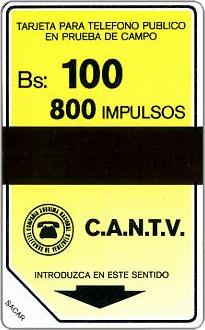 Chip cards from Venezuela are easy to get and issued in great quantities. But not all know that the first card used in this Country has been a magnetic one, manufactured by Italian SIDA and issued as a public trial on the occasion of the Papal visit. There had been two different printings of 1,000 each, being the magstripe height the only difference (13,5 mm and 15 mm). During the same period some Tamura cards were issued, and finally this system was adopted by C.A.N.T.V.