Turks and Caicos, a British Overseas Territory, is a Caribbean coral archipelago. The first cards were marketed in 1987: it was a series of three magnetic stripe definitives, supplied by Autelca, with values expressed in US dollars. The series included a complimentary 50 cent card, which despite the 12,000-piece print run, is rather rare; a value of $ 10, with a circulation of 15,000, and a value of $ 20, with a circulation of 20,000. In 1990, a further $ 10 card was issued, quite similar to the previous one, except that the slogan under the Cable & Wireless logo was changed to “Information technology in action”. Later, in 1991, public cardphones switched to the magnetic card system of developed by GPT. 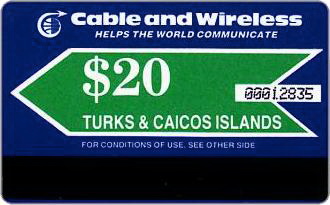