Produced by the English GPT, the first card used on the island was a complimentary card, representing a satellite antenna, with 1CYPA code and 10,000 run. Shortly thereafter, a series of three ordinary green and white (£ 2, £ 5 and £ 10) came into circulation, which were reprinted several times, and therefore exist with various codes. Depending on the year of production, they can be found with the so-called deep notch, characteristic of the GPT cards before 1990, and with the normal notch. GPT cards have been in use for many years, and several illustrated cards have been issued; in 1999 the system using chip cards was introduced. 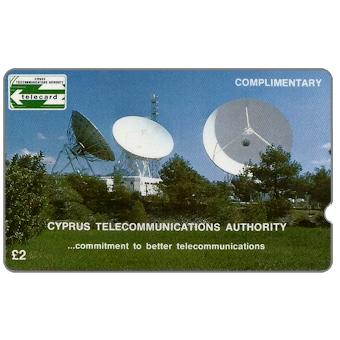